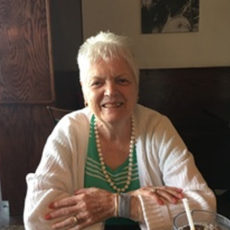 Lois Geneva Hahn Purdy passed away October 27, 2017 in Port Charlotte, FL. She was born April 23, 1927 in Egypt Mills, MO to Henry and Clara Hahn. She was the youngest of five children and fondly called Babe.  Lois married George E. Purdy on August 31, 1946 and lived in St. Louis, MO until 1964. They then moved to Marion, IN and lived there until they retired.  She cherished being a wife and mother. She was a great cook, seamstress, hostess, confidant, and friend.  She was life-long member of the Lutheran church. She was the nicest person you ever met.

She is survived by five children; Sharon (Sam) Gilliam, Linda (Randall) Humphrey, Dale (Evelyn) Purdy, Cindy (Michael) Kuester, and Phyllis (John) Hudson. She is also survived by fifteen grandchildren and six great grandchildren from the west coast (California) to the east coast (New York) to the northern tip (Chicago) to the southern border (Texas and Florida) of the country. She is survived by two sisters; Ernestine Merritt (97) and Elaine Hahn (95).

Lois was preceded in death by her parents, one brother, one sister, and husband.

The family will receive friends at Gardens of Memory Cemetery November 25, 2017 from 10 a.m. to 12 p.m. with funeral services following immediately after.

No Photos and Videos
Previous Virginia Nosek
Next Shirley Snapp