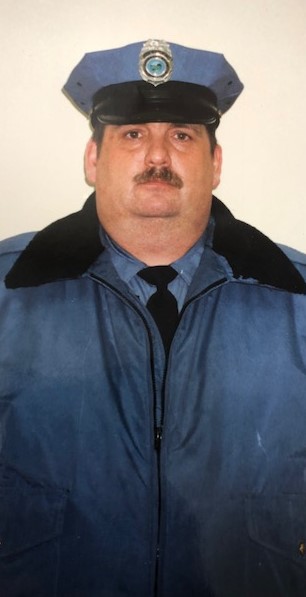 Greg was born November 14, 1956, the second of four children; Carl, Greg, Steve, and Mike, to Matthew (Bass) and Mabel Robb. He went to his heavenly home early Saturday morning on August 4, 2018 at Deaconess Hospital in Marion, Indiana after a lengthy illness. He will be greatly missed by his family and friends. He had a huge personality and filled all of our lives. He was one of the funniest people, I have ever known and some of my fondest memories of him are of the spontaneous and witty comments he came up with.

He could also be serious, though. He worked from an early age until he became disabled and he took his work in a steadfast manner.

The job he was most proud of and one that he excelled at was as a correctional officer at Wabash Correctional Facility. He received an award for finding a weapon and was often in charge of the house that he worked in. He worked hard at doing his job to the best of his ability.

Something else he was serious about was his spiritual life. As he became more ill and less able to get out, he wanted to start a Bible study at home and soon became one of the things he looked forward to the most.

The day before he passed away at the hospital, he suddenly reached up and said that he saw a stairway. I like to think that stairway was taking him to a better place.

To some, 61 years might seem ancient, but to me it just wasn’t long enough. There is not enough room to list all of the things he has said and done that I will miss.

I would like to acknowledge all of the wonderful people at Gardens of Memory Cemetery in Marion, Especially Anne and Auston. They went above and beyond in helping us do a good and dignified ending for Greg; letting me talk about Greg and helping in every way they could.

Thank you also, to the wonderful professionals at Gateway and Deaconess Midtown more than I can ever express. All of you were extremely kind and caring. When Greg was feeling better, he made it his mission to tease anyone he could; no one was exempt. I will always have fond memories of Greg joking with the nurses, techs, and therapist. I’m sure they will remember him also.

I would also like to thank the people at Transcendent Nursing Home in Owensville. They took good care of him at a very difficult time and I really appreciate all that they did for him.

Thank you to the hospice girls for helping and explaining things to us. This is a road we have never traveled before and they guided us every step of the way. Also, Social Services, who gently eased us from one phase to the next, all of you have a very difficult job that I would be unable to do myself and you are greatly appreciated.

Finally, thank you to family, friends, and neighbors, and all of those who supported and prayed for us. The phone in which we had contact numbers was destroyed and we were unable to call anyone. I apologize if anyone was left out. This has all been a long drawn out process due to a lack of resources. We were unable to give information because we often didn’t know ourselves from day-to-day.

As we are able, we will let everyone know as soon as we can, we plan to have a memorial for Greg when we are able.